He was born in Gragnano in the province of Lucca on 20 October 1918 and spent his youth in Valdinievole and in the Lucca countryside.
Very young, after a year’s stay in Naples, he moved to Rome.

In 1936 he approached the Roman artistic environment, particularly attracted to Mafai and Raphael.

After a first stay in Paris, in 1938 he returned to Montecatini in Valdinievole where he painted his first landscapes; of that time are also the first still lifes of flowers and some portraits in watercolor.

Called to arms, he met Giovanni Comisso, Filippo De Pisis and Giorgio Morandi.
In 1943 he met Ardengo Soffici and, after the war he joined the group of Pistoia painters and exhibited in many collective exhibitions in Pistoia and Montecatini.

In 1948 another trip to Paris with Comisso and other friends, where he met De Pisis again.
He held the first solo exhibition of landscapes at the Ariel Library in Montecatini in 1949 and the following year he exhibited at the XXV Venice Biennale.

Around the same time he began his first contacts with the Florentine environment of painters and writers and, known Ottone Rosai, for many years he attended his studio in Via degli Artisti.

He binds in friendship with Tirinnanzi, Marcucci, Capocchini, Pregno, while he settles in Florence. From 1956 onwards he entered into relations with the Galleria L ‘Indiano and began to appear annually or almost in exhibitions held in various Italian cities.

In 1957 he exhibited for the first time in Rome at the “La Medusa” gallery, presented by Luigi Baldacci.

In 1976 the Carrara Academy of Fine Arts held a vast anthology and six years later the Galleria La Strozzina in Florence dedicated an exhibition of 200 works from 1936 to 1982.

In the eighties and nineties he held numerous exhibitions in the major Italian galleries and two in Los Angeles.

In 1977 the Gallery of Modern Art of Palazzo Pitti in Florence organized a retrospective of his most informal works, painted in the sixties.

1982 – A large exhibition of paintings is presented in the Salone of the “Annunciata” Gallery in Milan; together with a large group of recent works (lagoons, seascapes, landscapes), a selection of works from the 1970s clearly shows the intensity of this long journey by Sergio Scatizzi.

In the spring of the same year, organized by Raffaele Monti and Alfredo Righi, and presented in the catalog by Carlo Ludovico Ragghianti, an anthology of works by the artist in Palazzo Strozzi in Florence gives an account of Scatizzi’s work from the 1940s to the present.

In 1986 Exhibition of Italian Still Life at the Castle of Mesola, foreword by Vittorio Sgarbi.

In 1988 the close collaboration of the art studio club 2R with the artist begins. Personal exhibition at the “Pananti” Gallery in Florence.
At the end of 1997 Personal exhibition “The years of the informal” at the National Gallery of Modern Art of Palazzo Pitti, in Florence. Organized by the director of the Galleria Carlo Sisi and by Antonio Paolucci, superintendent of the Cultural and Artistic Heritage of Florence, Prato and Pistoia, the exhibition is presented in the catalog by Raffaele Monti.
Since then the artistic path of Sergio Scatizzi is documented by the numerous exhibitions held in the most important galleries and by the extensive bibliography.
The artist’s last imposing show was held in Florence in 2006, at the Piazzale degli Uffizi in the Royal Mailroom Exhibition, with the Special Superintendency of the Florentine Museum Pole of the Ministry of Heritage and Cultural Activities.
Currently the artist lives and works in Florence.

They wrote about him:

Aldo Palazzeschi (1958) … In this last April I saw your flowers, your Florentine landscapes, your “whims”, your “things” as our dear De Pisis would have called them; they are painted with the same love, with the same trembling emotion; perhaps this painting is more desperate than before, something bothers you and scares you. You are authentic also for this.

Giovanni Comisso (1959) … From his landscapes and his flowers I saw how he found salvation in the color not kneaded on the surface, but in an objective depth, so as to believe that after the flood that has raged, they are already saving certain concepts for a new rebirth. The originality of Sergio Scatizzi consists in not having lost his balance, his painting testifies to have found that new energy that can give painting that new quality that, in the current upheaval of human taste, can adapt to the future mass without loss of essence.

Alfonso Gatto (1969) … The sweetness of the extensive and exhausting mixtures in his own verse, between filaments and reliefs inspired to define forms, to grasp the enticing vocations to be from the wear and tear that almost erases it: to give appearance to apparitions vertical of the love horizon, infinite – monotonous, that can only warn them: all this, between patient and rising, between meditation and shooting, between very slight scraps of tones and clear timbres of color, is the yearning and subtle education of a painting which is consumed and revived by style. …

Mino Maccari (1971) … Sergio Scatizzi is considered one of the very few artists who today defend the dignity and prestige of painting. His long, passionate research, controlled by a lively critical sense, led him to the happy mastery of the trade and to the expressive force that can be admired in his most recent works and which validate and deepen the exquisite taste, elegance and – that which matters most – the emotion and the sensitivity from which they are generated.

Raffaele Monti (1976) … Scatizzi paints with detachment, during a conversation; but the eyes are thick on the paper where a nucleus of sign – color modifies its appearance almost elastically. An imagined flower or a navy remained reflected in a distant memory develop like in a photographic bath; for minutes and minutes they change size, coloratura, reflection, behind the thrusts of a brush in which the impulsive case seems to operate and which, on the contrary, cuts and superimposes the edges of the necessary image. …

Carlo L. Ragghianti (1982) … The time has come – and perhaps has been late – to gather the critical judgment on this artist who has been in contemporary art with an incomparable and otherwise acquired appearance by the most careful and penetrating criticism. What still seemed to me to explode is the portion of Scatizzi in artistic culture, in the research and proposal of determinations of pictorial language in the great debate of this century in which art was recognized and was practiced not only in a traditionally professional sense or as an exercise of only poetic ascesis, but also of non-discursive analysis and intellectual verification of the same communicative and operative language. For the reasons I have explained, I hope clearly and without any bends or evasions, Scatizzi’s art includes, by intrinsic reflection of its own poetic value, some solutions of knots and historical problems that must integrate the context of an artistic culture that with independence visionary desire and can gain truth in the complex path that took place between the terms of abstractionism and subjectivism in the Euro-American culture after the Second World War.

Raffaele De Grada (1986) … We understand how, once the flowers are tamed, Scatizzi passes to other objects that, mixed with flowers and other vegetables, are thrown indifferently on the tables losing their characteristic of objects and living only as foam of color, in the informal taste of their material that is undone and is therefore no longer matter – object but matter – color. …

Jean Michel Gardair (1989) … Alien from today’s arcadias and from the refined refinements, Scatizzi’s style, very personal, comes from a complex culture in which the most imaginative languages ​​of this century coexist in a brilliant and poetic synthesis. Anchored to a taste that remains unmistakable, even where the pictorial symbols of each historical moment are preserved, which are indelible as well as indispensable marks of recognition. …

Antonio Paolucci (1997) … the Maestro is an exquisitely modern painter because he lives with excruciating grace the emotions and the contradiction of the present time. However, he is also an “ancient” painter as a true and great Italian artist of the twentieth century may have been, having crossed the adventures of the twentieth century without ever forgetting the profound reasons that sustain our figurative tradition. A tradition that has its points of reference in the contextual search for the splendor of the True and the inner harmony that gives order to the True. The art of Scatizzi has moved throughout this path. Now inclining from the side of pure beauty (the quality of the dough, the lighting of the colors, the touches of the spatula, the glorious stripes of the brush, the joy of sensually enjoyed painting) now favoring the structure of things, their invisible skeleton, the “very ancient and essential metric” (as Ragghianti would say) which allows us to understand the ultimate meaning of the visible world.

Gabriella Gentilini, (A look at the art of the twentieth century, Diple Edizioni, Florence, 2007) … In Sergio Scatizzi the theme of the Tuscan landscape is particularly felt, but it is treated with the impetuosity of the gesture dictated by inner urgency. From the color, spread abundantly with fast, vibrant spatulas of light that border on the informal, the joyful energy of life is released. Its volterranean lands are unmistakable, capable of restoring the primordial sense of nature, like the chromatic explosion of its flowers, in which the exultation of the pictorial gesture flows and the emotion becomes tangible in the plasticity of the pictorial material. An artist honored with numerous awards and winner of the XVIII Fiorino Prize of Palazzo Strozzi in 1967, Scatizzi boasts a training that includes a stay in Rome – where he came into contact with the Mafai environment – and one in Paris. His activity is intertwined with De Pisis, Morandi, Giovanni Comisso and with the Florentine artistic and literary environment of Ardengo Soffici, Ottone Rosai, Nino Tirinnanzi, as well as with Mario Marcucci, Ugo Capocchini and Enzo Pregno …

Gabriella Gentilini (from the catalog of the personal exhibition at Gren Faim, organized by Firenzeart Gallery, October-November 2007) … her energetic and material painting, the volteran lands spatulate with colors imbued with light, the flowers, fragrant with full-bodied freshness, still lifes, faded to the informal but accomplished in their explosive essence. 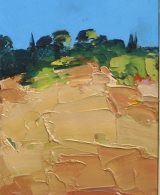