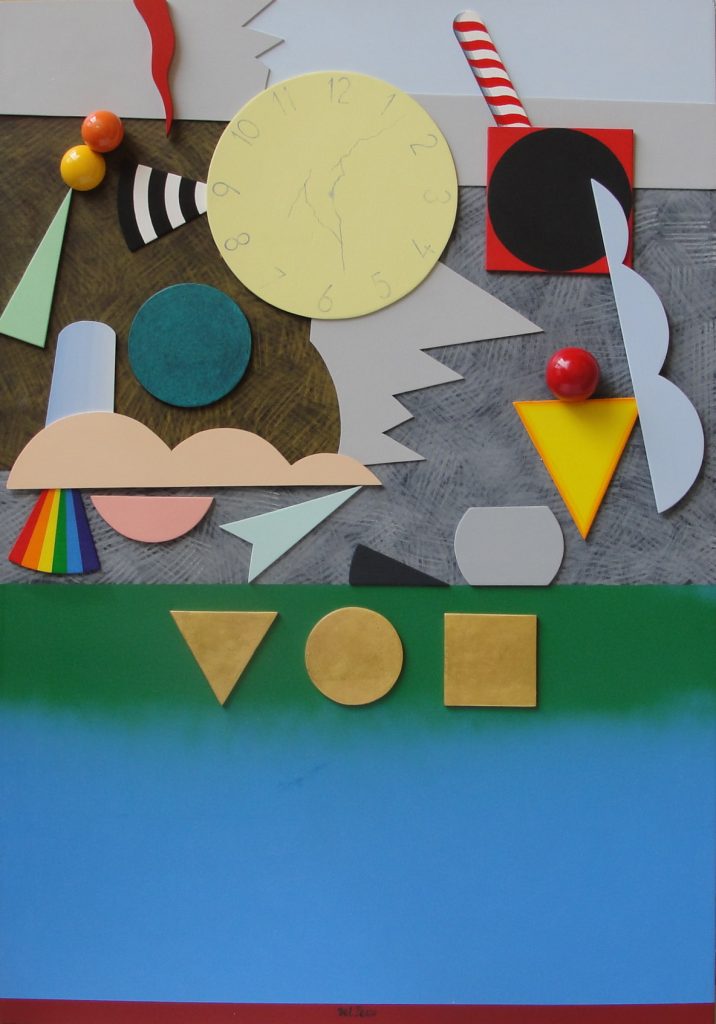 The time that goes out without heat
Lucio Del Pezzo

Lucio Del Pezzo trained at the Academy of Fine Arts and the Institute of Applied Arts in Naples.

In 1958 he participated with Guido Biasi, Bruno Di Bello, Sergio Fergola, Luca (Luigi Castellano) and Mario Persico in the foundation of the Group 58 in Naples, connected with the “Nuclear Movement” led by Enrico Baj in Milan and with the Phases groups in Paris , Spur in Monaco and Boa in Buenos Aires.

In 1959, Lucio Del Pezzo joined the “Manifeste de Naples” and actively participated in the creation of the magazine “Documento Sud”, a review of avant-garde art and culture.

He stays in Matera and works, as well as a painter, as a professor of ceramics in the Atelier della Martella, created by the Cascella brothers and by the architect Quaroni.
Decorate the dome of the Church of S. Antonio in Stigliano near Matera with a painting of 80 square meters, Stories of Antonio da Padova.
He then moved to Milan at the invitation of Enrico Baj and Arturo Schwarz. Holds a solo show in the Schwarz Gallery.

In 1961 Lucio Del Pezzo received the “Carnegie International Award” in Pittsburgh and presented his first solo show in New York.

In 1963 he held a conference on his own research in the course of Eugenio Battisti at the University of Genoa. He designs interior furnishings in collaboration with numerous architects.

In 1964 he realized together with other artists, including Baj and Fontana, the “Labyrinth of Free Time” at the XIII Triennale di Milano, obtaining one of the international awards.

He took part for the first time in the XXXII Venice Biennale.

He later moved to Paris, settling in the old studio of Max Ernst, but remaining in continuous contact with avant-garde movements and alternating stays in Milan.

In 1966, Lucio Del Pezzo participated in the XXXIII Venice Biennale with a personal room.

In 1968, the French State acquired two of his works and set up the “metaphysical hall” at the Museum of Grenoble (De Chirico, Max Ernst, Herbin, Carrà, Nevelson, Del Pezzo); he was also awarded two large outdoor sculptures for a complex of school architecture (a scientific high school and a school of architecture and decoration in Dijon).

He creates works related to the popular imagination, with inserts of various materials assembled according to the Dadaist lesson until reaching a personal meaning of Pop art in works that are both a painting, a sculpture and an object.

In the latter, the popular or common use object accumulates, appearing loaded with its own function and its own history and, at the same time, rises to a timeless presence, without however being alienated from the context.

From 1963 to 1965, in the ‘Collections’ cycle, the perspective construction of the work is based on the three-dimensionality of composite cantilever structures that bear objects made of wood, punctuated in spaces and painted in strong colors.

At the end of the decade, the ‘container picture’, called ‘Visual box’, neatly houses the panoply of the geometric icons of metaphysics, again created as geometric wooden solids applied to the various supporting surfaces.

The work sees the scale of the values ​​of the objects involved subversively leveled. The aura of dechirich nostalgia does not in any way underlie this new metaphysics.

Later on, the objects will be mobile and their relationships modifiable by the user (in ‘Sagittarius’, 1970) and the game with abstract forms will unfold with even greater freedom of invention, except for a subtle tension towards the order born in opposition and the inexorable disruption of the systems.

Tangent with Joe Tilson’s pop work, Del Pezzo’s work, however, creates a warmer relationship with the iconology of everyday life but, despite this, it is proposed to read in complete assemblies of exact linguistic consistency.

In 1970, Arturo Carlo Quintavalle curated a retrospective of the artist at the University of Parma.

In 1971, the artist collaborated with the French Ministry of Education working at the Sorbonne Faculty of Applied Psychology as an assistant to the art studios. He made a painted stainless steel bas-relief for a building by Giò Ponti in Milan.

In 1974, the Municipality of Milan dedicated a retrospective to the Rotonda della Besana curated by Guido Ballo.

In 1976, the Center Pompidou in Paris entrusted him with an animation stage on the theater at the Atelier des Enfants.

In 1978, Italo Calvino presented a personal exhibition by Lucio Del Pezzo, in Paris.

In 1984, he was invited by Guido Ballo to take the place of Emilio Tadini as the holder of the chair of experimental painting at the new Academy of Fine Arts in Milan.

He works on an educational film project on his artistic practice. Subsequently he will take care of the planning of several important scenographies.

In 1991 in Japan, the architect Alhadoff commissioned a sculpture for the company Sunstar in Osaka.

In 1998, Del Pezzo commissioned a large painting by architect Marco Zanuso for the Milanese headquarters of the fashion house Gian Franco Ferré.

In 2000, he designed four large ceramic reliefs and one bronze plastic for two stations of the new Naples underground.

The Mathildenhöhe Institute in Darmstadt presents the first major retrospective of his work in Germany. 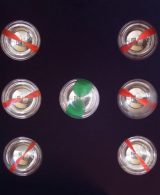 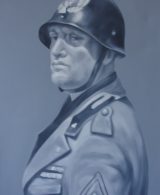