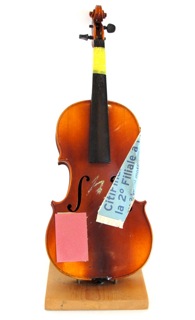 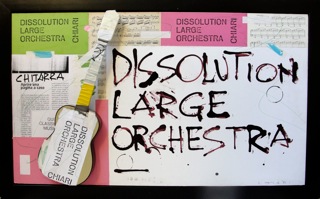 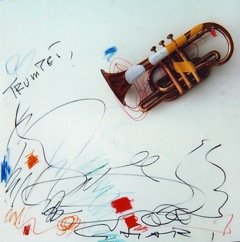 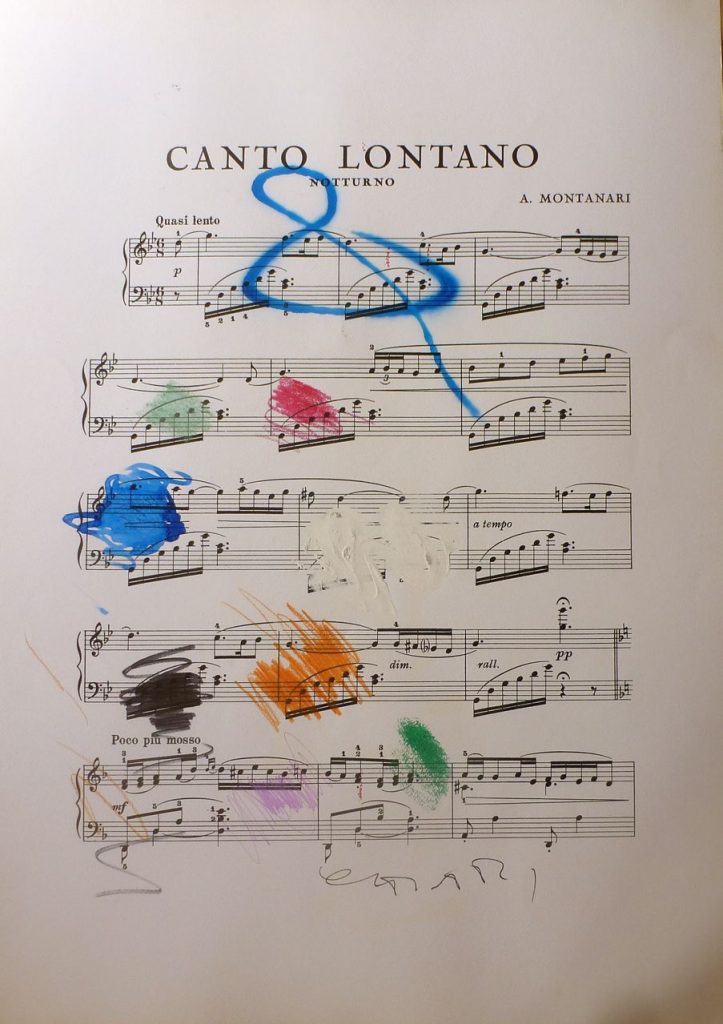 Giuseppe Chiari was born in Florence on 26 September 1926.

He began his engineering studies at the same time as those of piano and composition, with the aim of becoming a jazz music pianist; it also shows an interest in cinema, visual arts, architecture and literature, interests that will foster the development of a multifaceted cultural attitude sufficient to not allow its immediate artistic identification in the Florentine cultural environment.

Devoted to piano studies (always for the artist musical instrument par excellence, a sign of sound conformism and subjection to precise construction laws), Giuseppe Chiari in 1947 created with Giampiero Taverna the group of the Amici del Jazz organizing several concerts.

His first compositions date back to 1950: “do”, “Studies on single frequency” and “Intervals”.
Chiari in this period is fascinated by structured, analytical and conceptual creation and by all that is an invention that is not sentimental and idealistic.
Musically, he already knows the major musical demands of the century and of twelve-tone music, learning a fundamental aspect of it: creating his own logical rules for composing.

The involvement in the musical sphere, for him, is ever deeper, devoting himself with conferences, conventions and concerts to the diffusion of New Music, first with the composer Pietro Grossi with whom in 1961 he established the association Vita Musicale Contemporanea (made up of artists-musicians looking for new musical experiments), then with Gruppo 70 (founded with the poets Eugenio Miccini and Lamberto Pignotti, Sergio Salvi and the painters Antonio Bueno and Silvio Loffredo) with whom he has collaborated since 1963 in Florence with research on the visual value of the text.

The musical score is not considered only “as a basis for the performance of the sound piece, but also as a painting to watch, in which the notes and the representation of the gestures become visual elements”; Starting in the 1960s, Chiari, along with other artists including Bussotti and Cage, began to delve into the graphic components of musical writing, based on “words in freedom” and on the “free words” of futurism.

He begins to experiment with scores that can be transformed into elaborate diagrams, visual compositions no longer made to be performed and then listened to, but rather to be looked at and experienced.

In 1962, with Sylvano Bussotti, he coordinated the music-signing exhibition-event “Musica e Segno” conceived and presented in Rome at the Numero Gallery and, also crossing the frontiers of the Ocean, in Buffalo at the Creative and Performing Art Center, marking the beginning by Chiari of musical compositions based on the sign and the written word.

In the same year, again with Bussotti, he presented the exhibition “Gesture and sign” in Milan at the Blue Gallery.

Art, according to Chiari, is mixed with the different, so it is constantly variable so as to be “alive”.

Music, on the other hand, is the comparison between bodies and gestures, declaring that when a gesture is made and a sound is aroused it is no longer possible to modify them, they have already happened. (Gestures on the G. Chiari 1962 plan).

In the same year, Giuseppe Chiari joined the international and interdisciplinary group Fluxus, born in the USA to promote George Maciunas and based on alternative behaviors and continuous trespassing of the language specialty.

In ’63 his work “Teatrino” was performed in New York in a series of concerts organized by Charlotte Moorman and Nam June Paik.

1964 was the year in which Chiari became the performer of his works, concentrating the fundamental element of the work of art, no longer entrusted to a performer, giving value to self-presentation, associating the self-existent moment to that of action music and the exemplification of the different conceptual operations, however the self-presentation, the narcissistic gestures, remains the realization of the single work therefore linked to the interpretation of the musical piece.

With his visual and musical operations, through the gesture, the sound, the photocopy, the sheet, the paper, the letterpress (easy to spread materials to attack the art system, of communication, of institutions, typical of Fluxus) and with “visually innovative” tools it breaks down the techniques of painting, music, poetry.

Since 1970 Chiari has experimented with new expressive means: collage on sheets of paper, on musical scores, on musical instruments, on wooden boards – with the subsequent addition of strong touches of color. The objects, depleted of their first sound function, rise to a visual role with a new musical peculiarity.

Also contributing to the professionalization of Chiari’s musical activity is a series of requests coming from the political world of the left that invite him to bring his work to numerous venues and this is the case, for example, of “220 newspaper titles”, performances based on reading and analysis of the newspaper La Nazione, both with the publication of various texts including: in 1969 at the publisher Lerici, by express invitation of Magdalo Mussio, his first book is “Musica senza contrappunto”, which he followed in 1971 “Untitled” a repertoire of slogans presented at the Galleria Toselli in Milan on the occasion of a solo show, in 1974 “Musica Madre” an anthology of sentences and compositions for the publisher Prearo, in 1976 “Metodo per Suonare” was released, which among the other contains the 1969 opera “Suonare la Città” in which Chiari analyzes and transforms the city into a musical instrument, in 1994 “Musica et cetera” in which he reflects on the implications of music in of a broad cultural mechanism, of 1999 is finally “Sentences”.

In most of Chiari’s books, in addition to the fundamental meaning of the concepts expressed, it is necessary to underline the particular layout that makes words, sentences a graphic-aesthetic value in a visual language on a par with lines and colors, such as to consider them as works large-volume artistic works.

In 1989 he participated in the Fluxus Codex at the Museum of Modern Art in New York and the following year at Ubi Fluxus ibi motus at the Ancient Granaries of the Serenissima (Giudecca) in Venice.

In 1996 his exhibition Conceptual Music, at the Palazzo Rocca and Spazio Multimediale, ex Chiesa di San Francesco in Chiavari.

His activity as a visual artist led him to be considered today the most important Italian Fluxus artist in the international field.

Giuseppe Chiari died in Florence in May 2007. 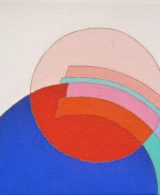 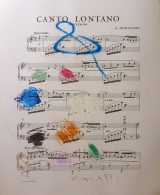